Always on the look out for something different, I came across this camera and lenses on Facebook Marketplace at the end of January.  The camera however, was not as interesting to me as were the lenses. They are Focal FD mount lenses which are also compatible with my Canon AE-1 Program.

The camera is a Canon T50 35mm SLR.  Released around March 1983, Canon took the functionality and the automatic working of a point and shoot camera and moulded it into an SLR body.  It's a bit clunky looking but is very simple to operate from an absolute beginners point of view.  The thing I like about this camera is that you can throw your cares to the wind and use it as a point and shoot.  It has the added benefit though, of being able to change lenses.  From prime lenses to zoom lenses, there are many FD Mount lenses that you could use with this camera that would give some excellent results.

This camera does not allow for changing the aperture setting.  The camera has a fully automated shutter with speeds of 2 seconds to 1/1000 when selecting automatic mode (point and shoot) on the lens.  Once moved out of auto mode and manually setting the aperture, the shutter has just one speed of 1/60 second (which is also the flash synch speed) so there is a good chance that the shot taken with aperture selected manually will not turn out.

The camera came with 3 lenses; all Kmart Focal brand.  As with all its Focal branded gear, Kmart would have other companies build the product and Kmart would simply put its own brand on it.  Kmart acquired Sears in 2005 and it was known that Sears sourced their lenses through Ricoh.  Kmart also sourced from major manufacturers like Haking and Cosina.

Haking (est. 1956) was a camera and binocular manufacturer based in Hong Kong selling cameras under the brand Halina.  In 1978, Haking bought out the US firm ANSCO and its trademark (which originally started up in about 1841 in Binghamton, New York as a daguerreotype gallery).  Long story short, in the 1950s, ANSCO was selling rebranded imports that were built by AGFA, Chinon, Ricoh and Minolta.  This rebranding was obviously continued after the takeover by Haking in 1978.

Cosina is a Japanese camera and lens manufacturer and founded in 1959 under the name Nikoh.  The company has produced cameras and equipment under its own name but is better known for making equipment for other brands such as Canon, Contax, Nikon, Revue, Olympus, Vivitar and Yashica!  I have also read that some Focal lenses are rebranded Makinon lenses.

It's pretty confusing but the long and short of it is; I have no idea what the original brand name of these lenses would be!

I Googled these lenses prior to use and was a little concerned with some of the reviews I read.  Most said that they were cheap (and let's face it; they are!) with soft focus and some went into some minute detail about chromatic aberration on the edges and this and that.  I have never let someone else's review make my own mind up though. Different lenses will give different results - embrace the differences, take note of how lenses can work to achieve a desired outcome!

The film I used for this was a Fuji Colour Superia 100.  It was expired in 2006 or thereabouts.  At the start of the roll I was shooting with the 28mm prime and then swapped over the the 80-200mm zoom.

I am very happy with the results from the 28mm prime; some nice sharp photos.  The 80-200 zoom faired well also, although when zooming into those ships on the horizon on an overcast and hazy day, there is more grain due to the lower light I think.  Both lenses have a split focus system which I like but, I have found that sometimes, it is a little difficult to get the correct part of my  multi-focal glasses just right when focusing through the viewfinder.

I went for a wander during my lunch breaks down to the beach and from atop the bluffs in James Fletcher Park in Newcastle to shoot these. 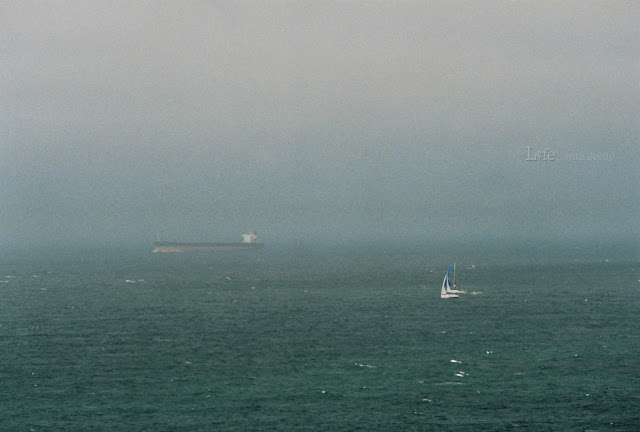 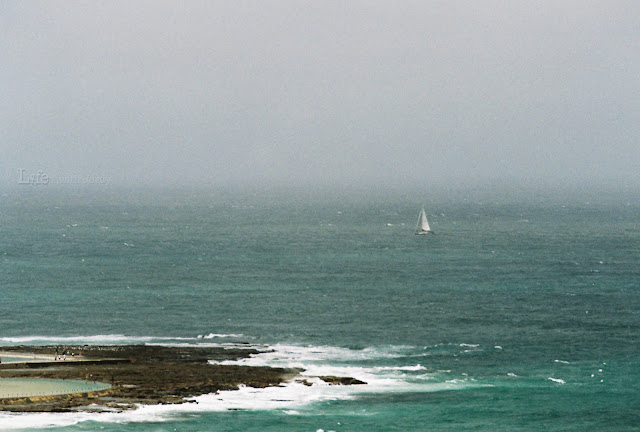 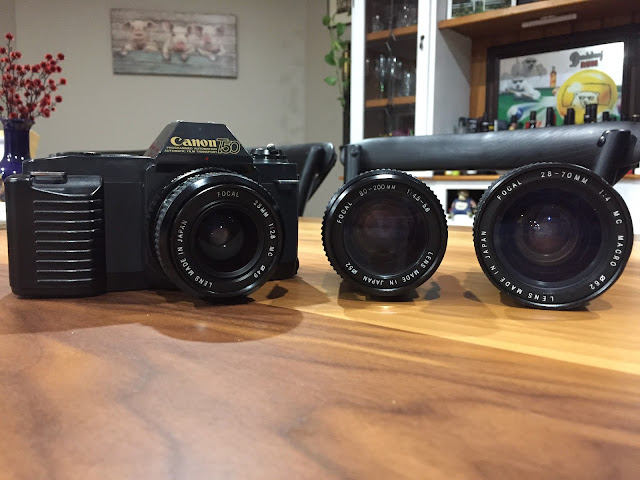 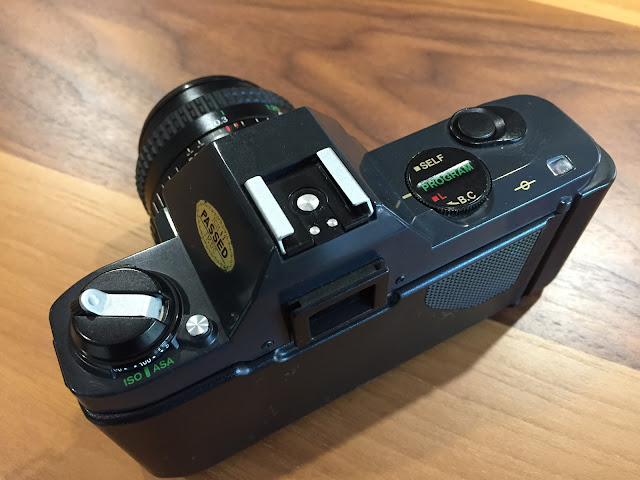 Much of my film photography of late has been taken with either Focal 100 (a 3M Ferrania film rebranded for K Mart that disappeared in the early 90s) or Fuji Superia 100 film.  I was gifted a large amount of film a few years ago and am gradually working through it.  Those films are expired but have been kept frozen and they are amazingly just as good as the day they were bought.

When I first got back into Film Photography, it was like Christmas at times!  Prices on eBay were very reasonable as people were offloading their old film cameras that they thought had no future with the growth of digital.  It was a buyers feast!

This camera, a Konica-Minolta Dynax 40 was one of my first camera purchases off eBay.  It came with a Minolta 28-100mm f3.5 zoom lens.  It was in perfect condition and I purchased it for only AU$35! The owner had purchased a digital camera and this had sat in his cupboard for years.

This particular model was introduced about 2004 as a basic consumer level intro camera.  This is a little surprising as the camera is packed with pre-programmed settings for Portrait, Night, Landscape, Macro and, Sports.  It has a choice of full manual mode, Aperture Priority and, Shutter Priority.  It also has a hot shoe for Minolta flashes or a pop up flash.  The lens I got with this camera was the standard kit lens that came with the package.  The lens did not receive some good reviews of those that I have seen but, I can't see why as I have never had a problem and think it is a nice sharp lens.  The camera also comes with Red Eye Reduction, Flash Synch is 1/90 second, shutter speed is 30 seconds to 1/2000 second and Bulb.  The camera will read the DX file for film speed and set that automatically but the ISO can be manually set from 25 up to 3200.  This camera also has auto bracketing for exposure and the ability to shoot multiple exposures on the one frame.  As you can see, this is hardly a 'beginners' camera.  It is a great size too and I can fit it into my shoulder bag with no problems.

Many would not realise the history and years of experience that goes into a camera like this.  Minolta was founded in Japan in 1928 and was the first to make the integrated autofocus 35mm SLR Camera.  It was merged in 2003 with Konica.  Konica was a company that had been around since 1873 when a pharmacist began selling his photographic paper in Tokyo.  In 2006, the company transferred its digital camera SLR section to Sony which then became the Sony Alpha (after the lens mount system) line of cameras.

The lens mount on this camera is the Minolta A mount system although some often refer to the AF system (which actually just stands for Auto Focus!)  Some modern day Sony A mount lenses are compatible with this camera although I highly recommend trial before purchase on that as some I tried did work whilst others did not. 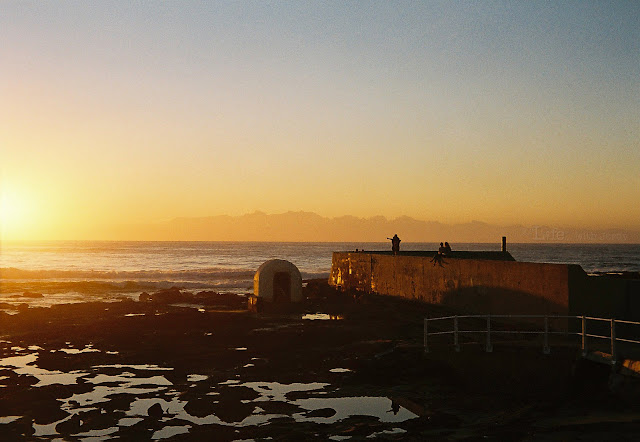 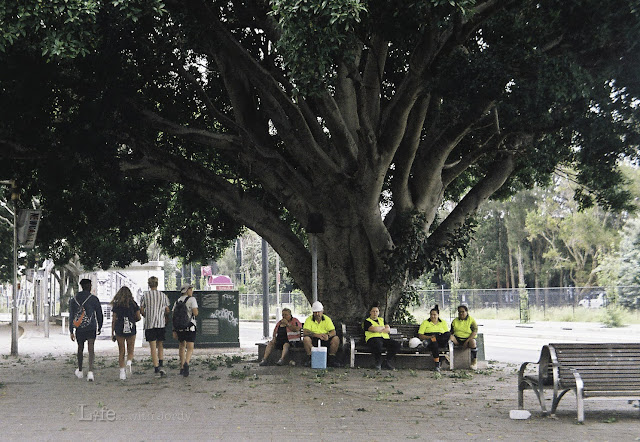 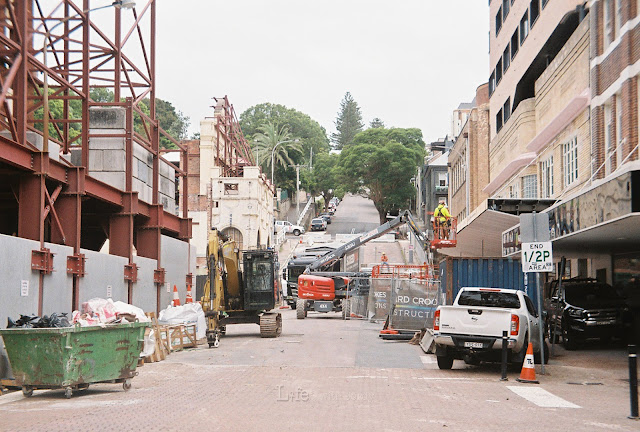 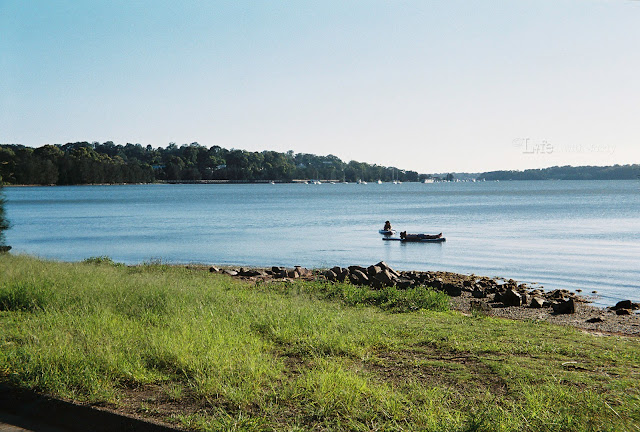 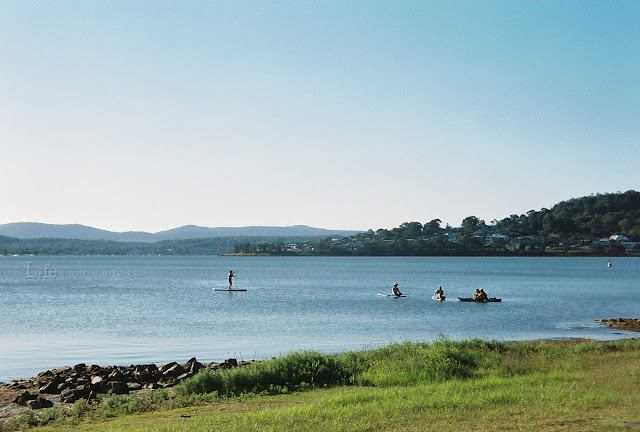 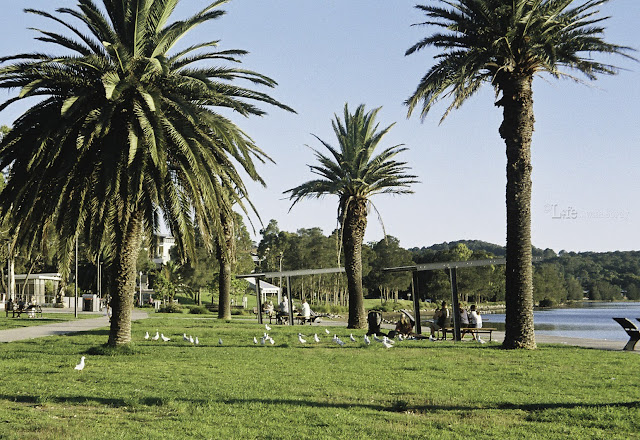 So, today I'm talking about a camera that has been around for a while.

The Emi K 35mm camera was released by the Oshira Optical Works company in Japan in 1956.  A pretty simple little camera; everything is manual including the focus.  It comes with a Fujiyama Eminent 50mm f2.8 fixed lens.  Aperture options from f2.8 through to f16.  Shutter speeds of 25, 50, 100 and, 300 with a Bulb setting also.  Not the fastest of shutter speeds so really, this camera is limited in the ISO range of  film that can be used with it.

It comes with a flash mount and a PC adaptor.  No, not a personal computer adaptor; a Prontor/Compur external flash synch socket with X Synch (the letter X for Xenon Flash).  This works via an electrical circuit with the shutter mechanism which activates the circuit once the shutter is fully open.  Prontor and Compur were two separate German companies who specialised in making lens shutters.  Both companies shared a common 1/8" coax cable connection.  This system became the standard for flash connectors over the years and was allocated its own International Standard (ISO519)  Although the tech has vastly improved since their introduction, many modern day DSLRs still utilise a PC connection for flash synchronisation.

This EMI K is a very solid little unit made from some type of dye cast aluminium alloy.  It's still in very good condition and not a scratch or mark on it.  If you go back a while to when I used this camera in Jan 2016, you would see that I was a little disappointed with its performance back then (visit that Blog post here).  At that time, the film did not wind on properly and was scrunched up inside the camera.  I had to take it to the Lab for the film to be removed in the Darkroom.  I think I got about 5 good shots of a roll of 36!  Still not sure to this day if that was simply a temporary glitch or operator error. But I do recall taking a close look at the camera at the time and the wind on spool did not appear to move in synch with the winding lever.

This particular camera has some history to it.  My older Brother bought it for my Dad.  My Dad was an avid photographer and used to develop and print at home.  It was a smaller, different styled camera to his Voigtlander Bessa 1 folder.  I am not sure how much Dad used this camera.  When I was in my senior years in Grade 12, I used this camera for my photography project as one of my Arts Subjects.  I am not sure what happened to that roll of film I used for that but I do have a few of the prints in an album.

Anyway, because I can't stand the idea of a camera sitting idly in the display case and, because this camera  and I have a history that goes back 42 years and, let's face it, I am a sentimental bloke, I decided to give it one more try.

I loaded it with Fuji Colour Superia 100 and took it with us when we went to the Markets at Pelican on the foreshore of the lovely Lake Macquarie.  Sort of like Street Photography without the street!

I am very happy to say that the camera worked well; no problems winding film on this time!  The Fujiyama lens is lovely and sharp and the Fuji film has a nice colour to it! 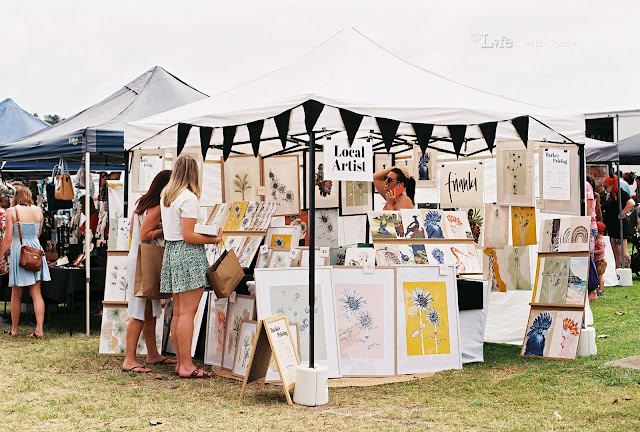 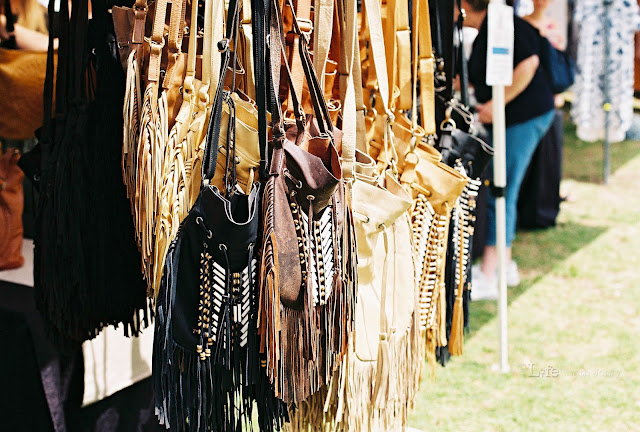 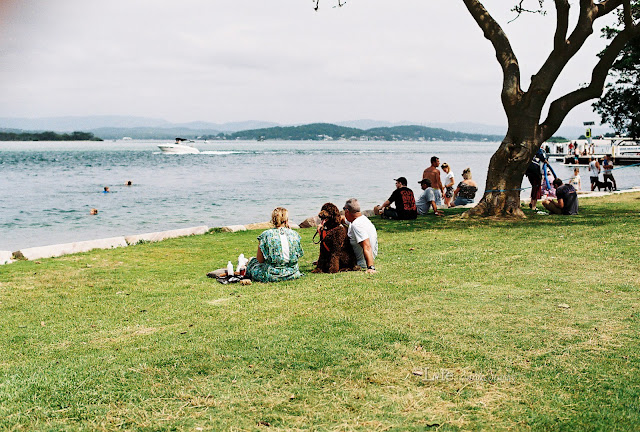 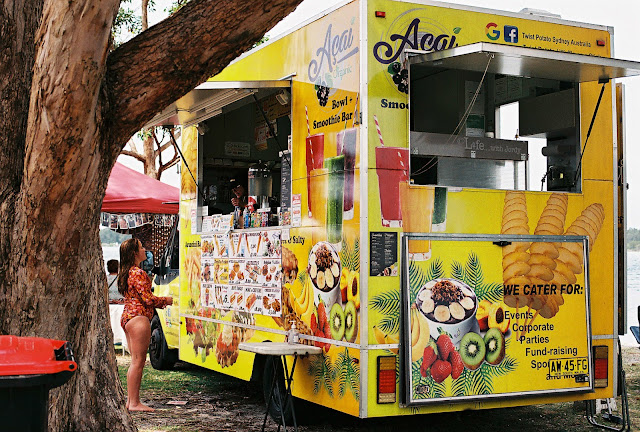 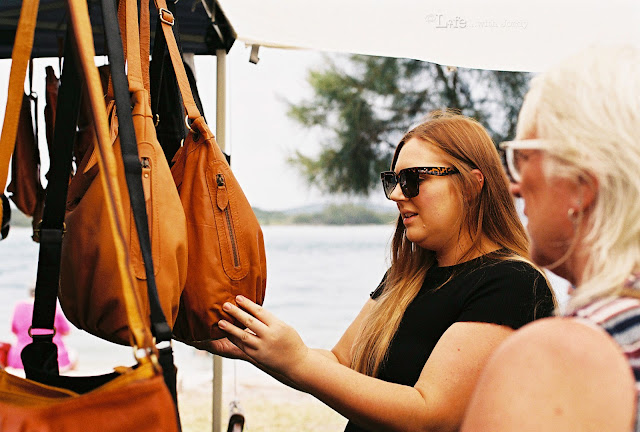 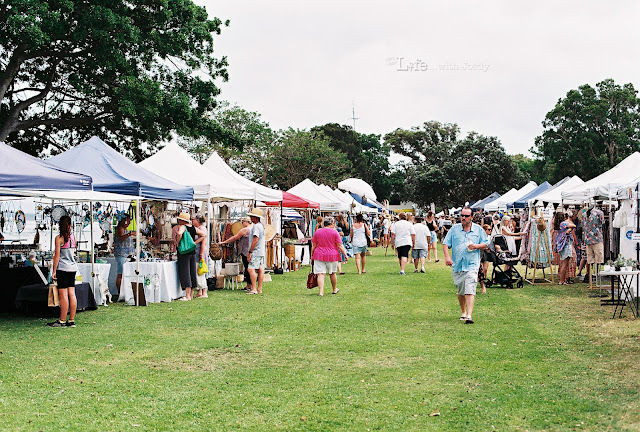 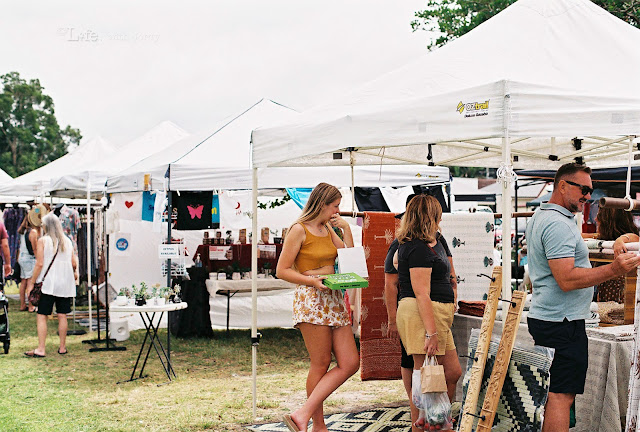 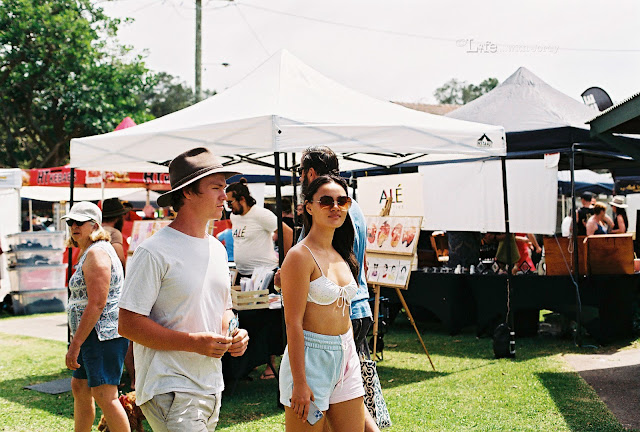 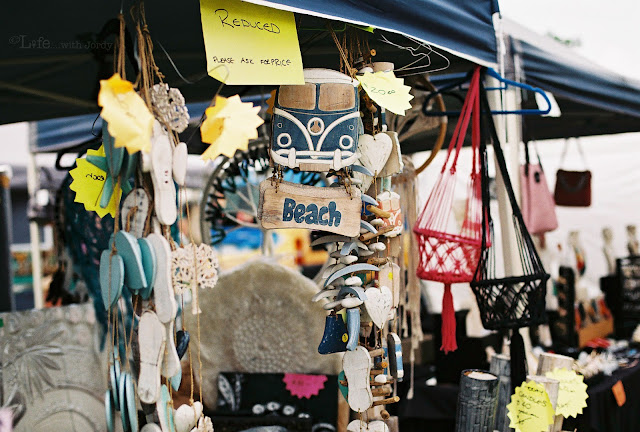 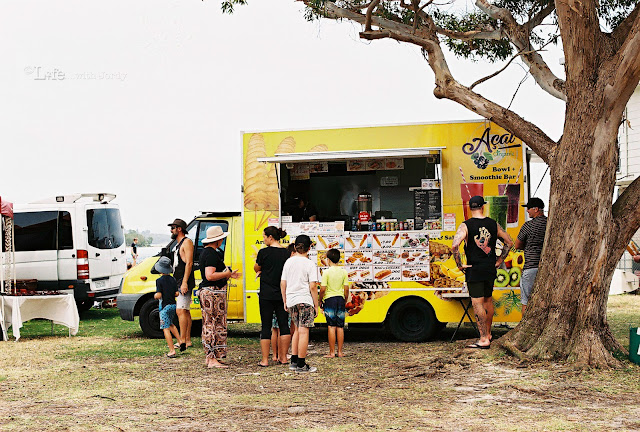 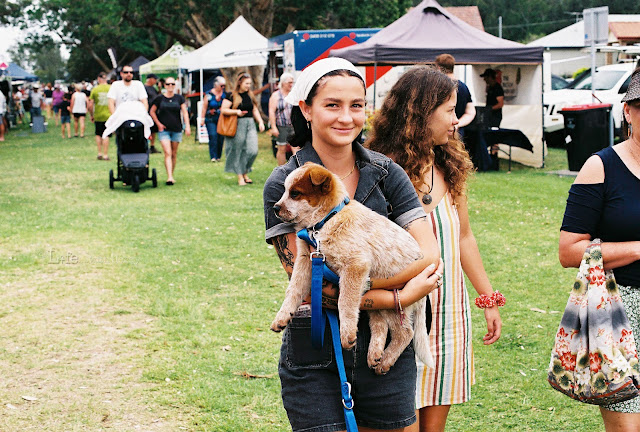 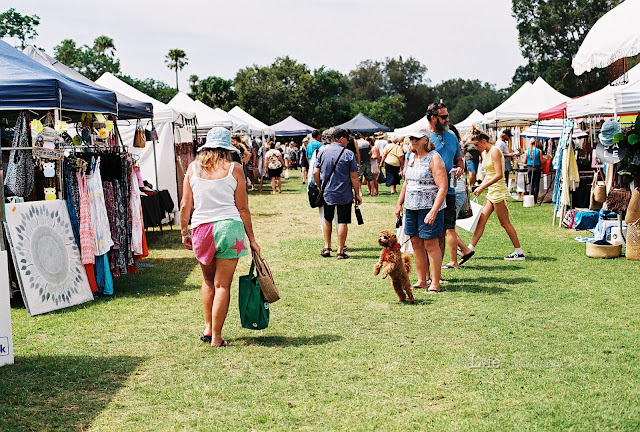 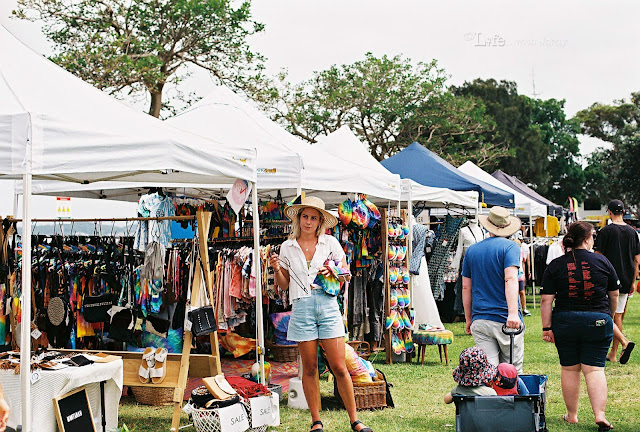 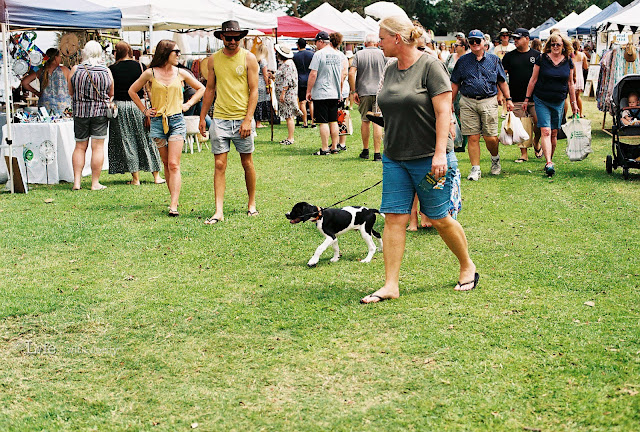 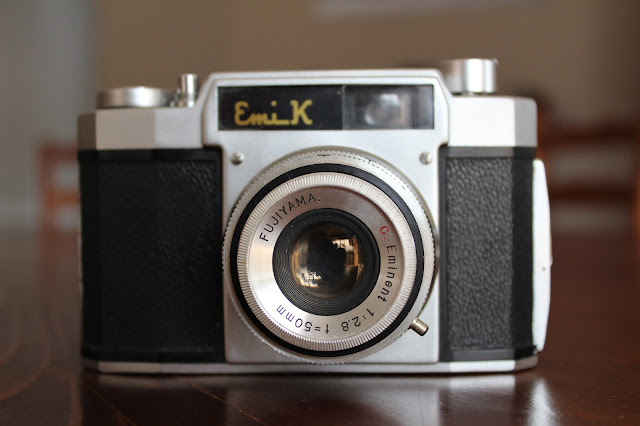 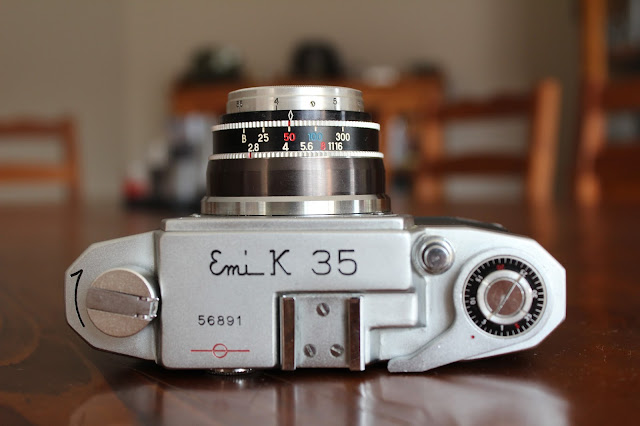 Always on the look out for something different, I came across this camera and lenses on Facebook Marketplace at the end of January.  The c... 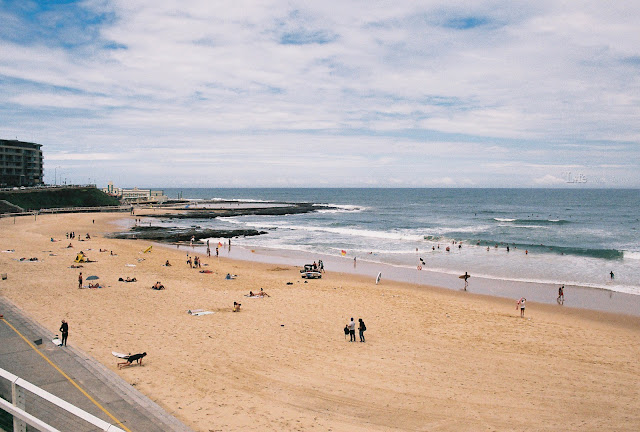