I have finally gone through the second roll of Fujicolor C200 film and had it developed and scanned last week.  Got some very nice photos out of it!

I am particularly excited because I only realized that some of my Pentax lenses are 58mm diameter; the same as my Canon lenses and that now I can use my Cokin system and screw on filter on both! Some of my Pentax and Sigma lenses are 55 and 52 and I will be buying the appropriate size Cokin adaptor for them shortly.

As with the last shoot with this film, Fujicolor C200, I am very happy with the colour it gives.  I use minimal editing digitally on the scanned result, and crop when needed. I stick to only using digital edit methods that I know equate to darkroom processing methods.  One day I hope to have my own darkroom but that is a way off from now.

These were taken using a Pentax SMC F 35-105  f4-22 zoom. It is the first time I have used it and it gives a lovely result!  I can't wait to use it for my next Street Photography project which will be in Black & White so keep your eyes peeled!

I hope that you all have been well in your part of the world and life is treating you good.

All photos on this blog are © Life with Jordy Photography and may not be used without permission.

I've been a little busy - but it's all good!

It seems like an age  since I posted on here last.

Unfortunately, I cannot ignore my real job (as a Radio Dispatcher for the NSW Police) which often gets in the way of what I love to do!  Don't get me wrong; I love my job working on the Radio but I get a lot more personal satisfaction from my photography.

Fortunately, the other thing that has kept me busy, was a great opportunity to enhance my photography experience in a very different way. However, I must tell you this short story first....

Some months ago, I received a message off my contact page from this blog. It was from the Editor of the NSW Police Monthly magazine.  She was requesting permission to use one of my photographs for a story.  I sort of did a double take at the time, wondering how they had found the photo on my blog.  When I asked her that, she replied that she had simply Googled photos of Nobbys Beach (the location they wanted) and my photo had popped up in the top 10.  (Have to admit that that rating on Google did excite me a little....)

When she found out where I worked, she asked me if I get out and about with my camera very much (Ha, is she kidding!?) Anyway, as with most Government Departments, the magazine is on a shoe string budget. There is only 1 photographer to cover the whole of the State of NSW for the Police Force, so they rely on the goodwill of enthusiastic amateur photographers (staff of NSW Police) to help out. Long story short; I have provided photos for articles in the magazine ever since.  It is not a paid thing but, that does not bother me; I reap the benefits of the experience.  I am learning about taking photographs for print media where I must consider that they will want to put print over some parts of the photo and I must take into account the composition to allow for this. I am also getting acknowledgement for the photo in the magazine to Life with Jordy Photography, which has the potential to send more people my way online.

Anyway, about 2 weeks ago, I had an email from the Editor asking if I would like to do a job for them. The Special Olympics Asia/Pacific Games was being held in Newcastle and the regular photographer was not available for the opening ceremony. Luckily, I was not rostered on and was able to attend for them.

The reason that the Police Media wanted to cover this is that the Torch Run for these Special Games is organized by Law Enforcement Agencies around the world to raise money for the Special Olympics. It is actually known as the Law Enforcement Torch Run (Google it and see how big it actually is!)

I learned a lot over the course of a few days!  Police Media had to negotiate with the Special Olympics Committee for a place for me on the arena on the Opening Ceremony.  Of course, I needed a media pass.  Although I was given total access to the field, it was indicated that I should not just go wandering about! I had to be in certain places at certain times to get PR photos of the Torch Runners and the Commissioner. I had to meet up with a Media Manager whose job it was to monitor the numbers of media on the field at any given time.  The TV media covering the event would not allow the use of flash on the field and so I had to turn up the ISO (which didn't turn out too bad) to get correct exposure.  I was right there for the final handover of the Torch from the Police Commissioner to the athlete for the lighting of the cauldron.  I got some photos in before I pulled back the zoom to get the wider angled shot.  At that exact minute, the bloody TV camera crew walked into shot between myself and the other 2 photographers blocking out the Commissioner and the athlete.  By the time I had quickly changed position the moment had gone!  Luckily, the 2 photos I took of the Torch handover turned out well and the magazine can still use them!

The other photos I took on the night and in the earlier Torch Runs will be used for Public Relations and also as File Photos for any future story.  I'll just post a few here!

The worst part of the whole experience was fighting the horrendous traffic into the stadium at Newcastle!  It took me 30 minutes to drive the last 2 kms to get to the designated parking area that had been organized!

It was a wonderful experience!

I hope you have all been well, as we have.  Take care in the hustle and bustle leading up to Christmas! 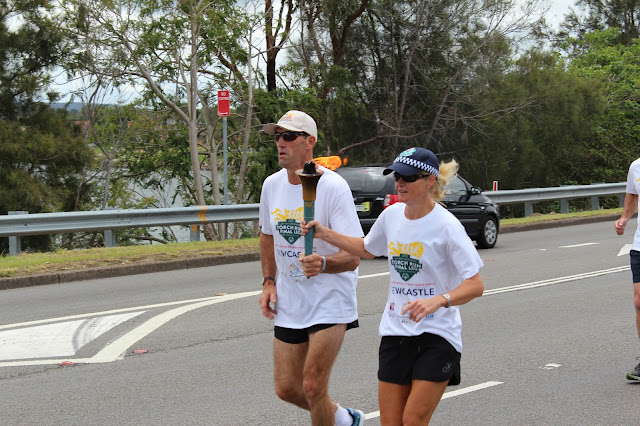 Hit Brissy up last weekend.  My Niece was getting married and it was a family get together that I did not want to miss out on!  She looked ...